One year after: IHP has completed the work with the last humanitarian hub in Bangladesh

The International Humanitarian Partnership (IHP) has since the early stages of the Rohingya crises been establishing essential humanitarian facilities for the International Organization for Migration (IOM) and the World Food Programme (WFP), in support of the humanitarian community’s response efforts.

IHP has now handed over the recently finalized humanitarian hub to WFP. Since October 2017, IHP has established and donated three humanitarian hubs to support the critical emergency response efforts at the border area between Bangladesh and Myanmar. The hubs were established in support of and together with IOM and WFP. The capacities and location of the hubs are critical for UN agencies and humanitarian actors’ efforts to provide assistance and coordinate humanitarian interventions in support of the Rohingya population. The population have been under extreme pressure due to the forced movement from their homes in Myanmar and also due to the effects of the monsoon rain, which has caused mudslides and increased health-risks in the densely populated settlements.

The WFP hub in Kutupalong

IHP has since March 2018 established office, coordination and accommodation facilities. The facilities can accommodate up to 37 staff-members. On September 6th, the hub was handed over to WFP, henceforth IHP’s presence in Bangladesh ends for now. The facilities are, among others, used by the Site Maintenance Engineering Project (SMEP), and are located less than one kilometer from Kutupalong, which remains the largest of the settlements in the area of Cox’s Bazar. The hub now works as a base of operation from where numerous organizations work closely together and have easier access to the sites.

The IOM hubs in Kutupalong and Nhila

The hubs were built as coordination centers with office space for 45-50 humanitarian workers and meeting facilities for up to 60 persons. The two hubs are used as field offices and a coordination platform for actors involved in the humanitarian response in the settlements of Kutupalong and Nhila.

Impact of the hubs

Due to a lack of infrastructure around the settlements, access to the sites and implementing and monitoring of relief activities have been problematic and time consuming. Overall, users of the hubs highlight higher level of coordination and improved partnerships, enhanced staff safety and working environment. Furthermore, the accommodation facilities increases relief workers work-efficiency as daily transportation time dramatically decreases with approximately 3-4 hours per day.

The newly established hubs have facilitated that implementation and monitoring of the ongoing humanitarian assistance is done to a larger extent from the field rather than remotely from Cox’s Bazar. Another positive outcome, as a direct result of the establishment of the hubs, is the possibility of improved capacity building for the Rohingyas. The populations possibility to move around in the area is restricted but thanks to the hubs there is now space for them to receive training. This has led to not only to strengthening the capacity of the response but has also strengthened relationships between the different actors.

The IHP Team consisted of support from Denmark, Estonia, Germany, Luxembourg, Finland, Sweden and Norway. The respective Government of each IHP member has been in support of and has funded the deployment of staff and resources. 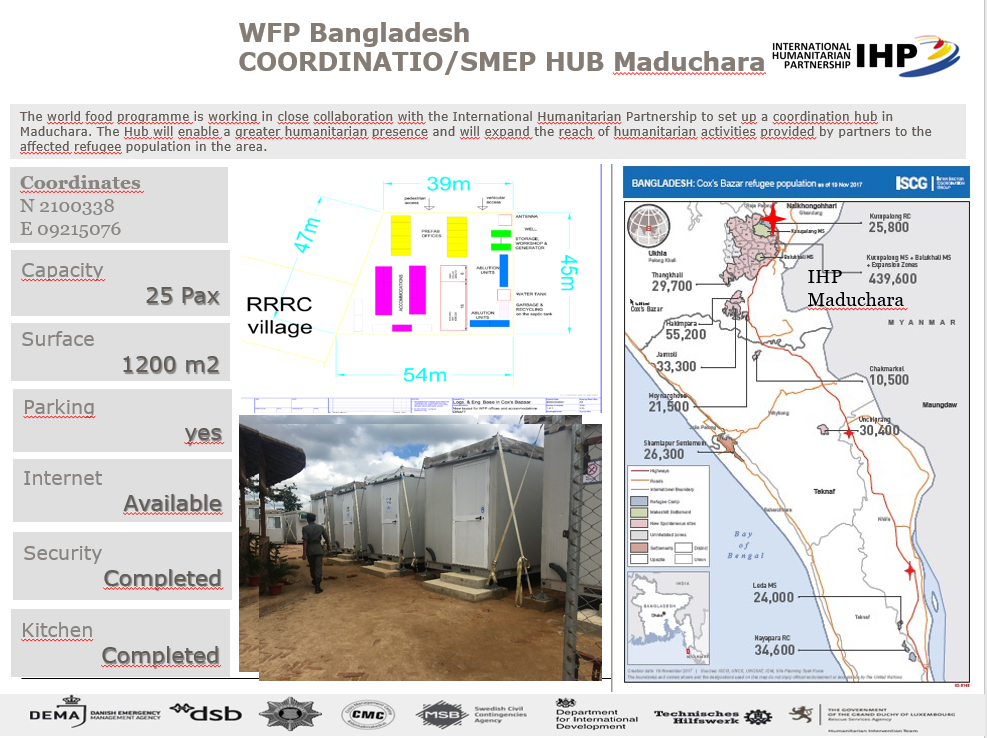